We are happy to offer these commercials and videos for the GMC Community. We thank all of the contributors in sharing these for all of us to enjoy. We welcome all historical and technical information. If there is something that you would like to share, please contact . Thank you!

Introduction of the GMC Motorhome to the Media

The GMC Motorhome was introduced to the news media at the Anaheim Stadium on January 3, 1973. The media saw a demonstration of the vehicle’s performance capabilities; rode and drove the motorhome themselves, and particpated in a news conference with top GMC executives.

A number of RV shows and demonstrations were used around the country to exhibit the features of the new GMC Motorhome. One of the most impressive demonstrations was of a GMC Motorhome followed by another brand of motorhome fitted with a cover to obscure its manufacture (it was a Banner), running over 3″ x 4″ type timbers spaced a few feet apart demonstrating the difference in suspension abilities. The GMC handled the timbers with ease; its tires danced over the obstacles with the body barely bouncing. The covered motorhome with leaf spring suspension on a competitor’s chassis had the tires leaving the ground and appeared to be leaping in the air after the third or fourth timber was crossed. The viewing crowd loved it.

GM shocked the world for the 1973 model year with the debut of the beautiful GMC Motorhome. The 1973-1978 GMC Motorhome was an engineering wonder that was decades ahead in styling and engineering to its closest completion. The Motorhome revolutionized the large RV market, but why did GM cancel it? Watch this video for the answer to this question. (Published September 20, 2018 | OldCarMemories.com)

Stated in this video is a conclusion that states, “short sighted bean counters decision” caused the GMC Motorhome to be discontinued. Financial accounting, bean counters, report on financial accounting facts.  Based on these facts and possibly other judgements, management may make the decision to take action.   In the case of the GMC Motorhome, it was GM management that decided to discontinue production.
The official reason given by GMC for that action was correct but incomplete. Not mentioned was a serious concern for the future, the design of a larger, heavier motorhome which is where the market was headed. It is important to remember the 1973 motorhome had a 10,500 GVW, by 1978 it was 12,500.  An increase of nearly 20% with few design changes to compensate for the increased loading.  The original design used many passenger vehicle parts that were likely near reliable design limits.  Many of these parts had been discontinued or were to be discontinued soon due to the auto industry down sizing.
What was GMC to do?  A major redesign would have been required if the motorhome were to continue.  The cost of a major redesign would likely have been many millions of dollars. From a Corporation point of view I believe the appropriate decision was made.  From a GMCer point of view, how sad!
A minor point, but one used in the video that causes confusion is the rear wheel design, stated “side by side” is a dual wheel description, the GMC is “tandem” two wheels “one behind the other”. 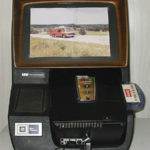 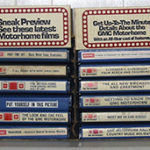 Starting in 1973 and continuing through 1977 a number of films were produced to promote the GMC Motorhome. Upon entering a dealership showroom, you might see what looked like a small screen TV set along with a number of film cassettes. GM called these units Mini-Theaters and films could be viewed with this self-contained unit allowing the potential customer to view the many features of the GMC Motorhome. There are thirteen of these sales films, in addition there are three others from a TV program of the time that emphasized the joys of RV travel, “Holiday on Wheels”. There are also several service films intended to instruct service personnel with the proper repair procedures for various motor home sub-assemblies. 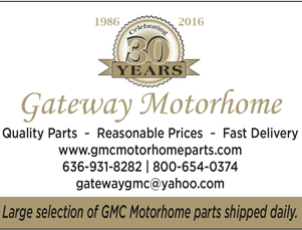